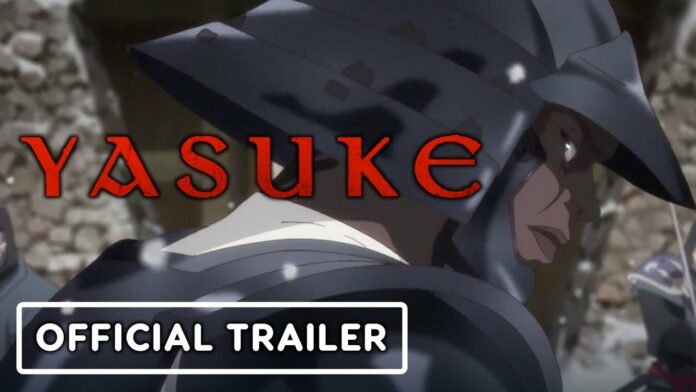 Netflix is producing a lot of original anime series this year. One of the most anticipated and riveting action original Netflix anime series, Yasuke Anime, will be released on 29th April. The 6 episode series is based on the real-life story of a 16th-century Japan-based Black samurai. Netflix has teased the first trailer and one can see few deviations, expectedly, from the true story.

LeSean Thomas, who is best known for work in Cannon Busters, The Legend of Korra, and The Boondocks will be working on Yasuke 2021 with a brilliant team. So it is quite understandable that Netflix anime fans are excited about the upcoming series.

With the top-notch staff, amazing star cast as Oscar nominee LaKeith Stanfield voicing Yasuke, and an unmatched animation studio MAPPA being onboard, the trailer for sure will exceed everyone’s expectations. Check out the latest Yasuke Anime trailer below

The Yasuke anime Netflix trailer teaser showcases the Japanese cast. MAPPA studio has lived up to its reputation when it comes to animation. It has done an astounding work portraying the characters and bringing them to life. And of course, the music composition by the Grammy nominee Flying Lotus is just the cherry on top.

As much as the animation is crucial for an anime series the OST and BGM are also no exception. The Grammy nominee Flying Lotus is the composer for the upcoming Netflix original anime series Yasuke 2021.

Both opening and ending credits have been released by Flying Lotus. They feature other artists like Thundercat and Niki Randa. The opening track is titled ‘Black Gold’ and the Ending theme is ‘Between Memories’.

Black Gold is a powerful track yet having subtle beats and synths that will get stuck in your head easily. While the track Between Memories has a more melancholic feel to it with ambient chill beats.

As much as the new trailer left everyone wonderstruck, fans are eagerly waiting,
holding on to their horses for the series to be aired. Well, the long waiting will come to an end on the 29th of April,2021. It will be available for streaming on Netflix under its anime series category.

Lakeith Stanfield is the person behind the English dubbed voice of the Yasuke anime character. The actor also featured in the Netflix series Bojack Horseman, playing the voice actor for the cartoon character, Guy. The protagonist Yasuke is played by Japanese actor Jun Soejima.

The amazing starcast embarked on this action fantasy are listed below;

One of the best action anime series, Yasuke is a true story based on the only black samurai who ever lived. Yasuke served as one of Japan’s greatest leaders, Oba Nobunaga. While it does not stick to the whole story, it will loosely follow the journey of the black samurai Yasuke anime who went on to become one of the most important historical figures in the world.

With history witnessing the great valor of the Black Samurai he is no sudden epiphany to some, but to some, it’s high time to stop sleeping on him and get to know about the very legend.

True Story
Yasuke was an attendant of the Jesuit missionary Alessandro Valignano during his visit to
Japan in 1579. He was 24-25 years with a stature of over 6’2″ and with much eccentric black skin he stood out amongst the Japanese.

Later his soaring popularity evoked the curiosity of the Japanese warlord Oda Nobunaga. Awestruck by his unbothered appearance and mighty emulating multiples, Oda Nobunaga was convinced to have him as his personal bodyguard.

As Yasuke seemed to grow on Nobunaga, he adorned him with the highest privileges. But soon as Oda Nobunaga’s sovereignty was over Yasuke was further assigned to a missionary located in Kyoto by the rivals. It led to Yasukes’s glorious days fading into an enigma.

MAPPA, the famous Japanese animation studio that brought us the likes of Attack on Titan and Jujutsu Kaisen is the official animator of the series. Undoubtedly, the animation quality and the action scenes will be some of the best.

We cant wait to see what Yasuke anime has to offer. Do share with us your excitement and what you are looking forward to.

PUBG Mobile is undoubtedly one of the most popular Battle Royale mobile games enjoyed by casual gamers to the pros alike....
Read more
Mobile Phones

2021 has come and gone leaving us with the latest generation of Apple's popular iPhone lineup, the iPhone 13 series. Yet, with...
Read more
CryptoCurrency