Google ‘Task Mate’ Invitation Code & Everything We Know So Far! 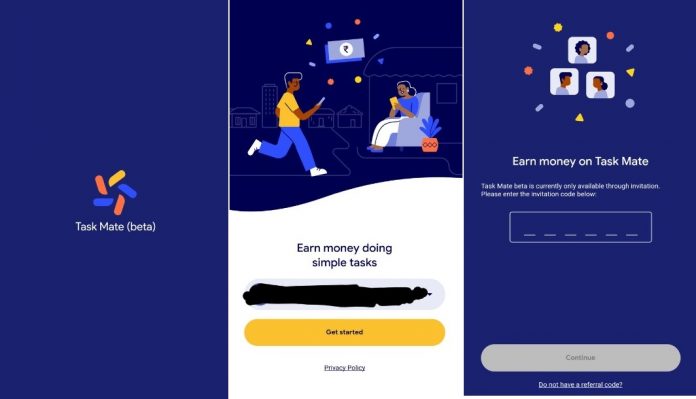 Google is beta testing a paid crowdsourcing app “Task Mate” in India. Built on similar lines as the Google Opinion Rewards app, ‘Task Mate’ lets the user “earn money doing simple tasks on your smartphone.”  These simple tasks are related to the Google app ecosystem. The only difference from other paid apps is that Task Mate users will earn in INR rather than the usual Play Store credits.

The app is in the beta “Early Access” phase as the TaskMate app page claims. Though “Task Mate” can be downloaded but it cannot be used since it needs an invitation code or a referral code to get started. The description on the page about the ‘Task Mate’ Invitation Code reads:

The app’s USP lies in its ease of use and an easy means to earn. Money can be received in the registered e-wallet account or with the help of an in-app payment partner. It doesn’t need any qualification and any user can complete 3 basic tasks. They include
* Find tasks nearby
* Complete a task to begin earning
* Cash out your earnings

The TaskMate app gives the opportunity to everyone. Those who are on the move or ones sitting at home. Basically, it has two types of tasks — “Sitting” or “Field Tasks”. As the names suggest the “Sitting” task can involve transcribing to the local language or recording sentences.

While “Field Tasks” may ask the user to stroll to a nearby business. One such example of direction from the app can be to go “to location shown in pin and take a photo of the shopfront once you’re there.”

As per the screengrabs on the app page, there are few more tasks which can be added:

As an example, you may be tasked to go to a nearby grocery shop, reply to survey questions, click pictures, translate to spoken language, and share shop details. The intent of Google behind building this app and making it paid is to “improve mapping services and bring business in your local area online.”

There is a link at the bottom of the referral code screen to raise a request for an invitation code. Currently, it is not working but hopefully, it should be up and running when the app is rolled out across the country. A Google support page of Task Mate App has also come up.

As of now, the equation between local business and Google is unclear. Whether it will be crowdsourced or Google will charge from them, it needs to be seen. There is one more catch. Will Google put a cap on the cash or maximum tasks? If Google doesn’t put any sort of cap on the number of tasks or cash amount, then Indians will get hooked onto it. Since it is coming from Google, the app will not be a scam!

There would be many who would consider the move by Google as a means to collect local data. The only difference is Google will pay for collecting personal data which was free earlier. Some would enjoy the opportunity to earn a free meal by answering questions during idle hours.