PhonesWiki
Home News When can I watch Big Mouth Season 5 on Netflix? Spoilers Ahead!
NewsEntertainment

When can I watch Big Mouth Season 5 on Netflix? Spoilers Ahead! 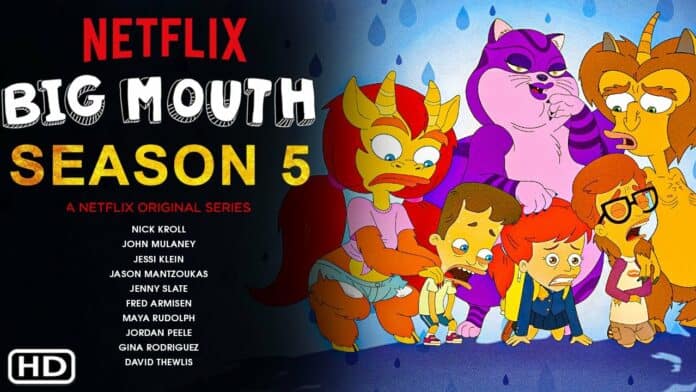 The 2017 debutant adult animated comedy, “Big Mouth,” has secured for itself a huge viewers’ base securing 99% on Rotten Tomatoes. Contrary to the messy adolescence of the Big Mouth’s characters, the show, however, had a smooth road when it came to delivering new seasons. Its enormous fandom has given stiff competition to Rick and Morty franchise and pushed Netflix to make the announcement for the Big Mouth Season 5 release.

Big Mouth, a Netflix Original is an adult animated sitcom from Nick Kroll, Andrew Goldberg, Mark Levin, and Jennifer Flackett is coming sooner than expected with Season 5. It is even less than a year when Big Mouth Season 4 made a debut in December 2020.

Yes, you heard it right. Big Mouth will return with its Season 5 on Friday, November 5th, 2021 on Netflix. The same was revealed creator and actor of Big Mouth Nick Kroll during the Netflix TUDUM event. That is not all. Here’s a cherry on the cake too. All the episodes of the new season will release at once. Get ready for some exciting binge-watch, fellas!

Where can I watch Big Mouth Season 5?

Being a Netflix Original show, Big Mouth Season 5, like other seasons of the series, will be available for streaming exclusively on Netflix.

To stream all the seasons of Big Mouth on Netflix, one can start with a basic subscription plan. The service costs £5.99GBP/$8.99USD/month. You still have time to renew your Netflix subscription.

What is Big Mouth about?

A newbie to the show? Allow us to introduce you to the world of Big Mouth!

Creators of The League, Nick Kroll and Family Guy, Andrew Goldberg, joined their hands to come up with this venture. The first season of Big Mouth was released on Netflix in 2017. Following that came three more seasons of it, each funnier than the previous.

The show primarily focuses on the nightmares that puberty brings and takes a hilarious stand at what it likes to be a teenager. Big Mouth paved the way for adults to enjoy animated cartoons just the way the younger generation does. The four Emmy Nominee, Big Mouth, deserves a watch.

Along with being the co-creator, Andrew Goldberg is also serving as the showrunner as well as the executive producer of Big Mouth S5. Apart from him, Nick Kroll(also a co-creator), Mark Levin, and Jennifer Flackett are also executive producers of the show.

The latest poster features Maury flaunting ink over his knuckles. The ink from one knuckle reads ‘LOVE’ while the other reads ‘HATE.’

How many episodes will Big Mouth Season 5 have?

The makers have not released any official confirmation on Big Mouth Season 5 episodes. However one can speculate on the basis of the past 4 seasons and 10 episodes can be a fair guess.

Season 5 expectedly will take off from where Season 4 ended. If you remember right, the Season 4 Episode 10 ended with characters fighting bouts of anxiety and making all possible efforts to overcome. In a way, it portrays “life sucks and part of growing up is learning to deal with it”.

Season 5 will kick off with “No Nut November” and continue to entertain through New Year’s Eve. It will take on the theme of Love & Hate with the introduction of lovebugs and hate worms(the reason why the poster features Maury rocking those two words on his knuckles). Lovebugs and hate worms are a kind of creature that can alter/shift between these two forms(just like caterpillars who grow into butterflies).

It’s Walter, Nick’s lovebug who pushes him to persevere his feelings for Jessi who publicly rejects him. This turns Walter into a hate worm who leads Nick down a dark, rancorous path. In the meantime, Jessi starts getting cosy with Ali. However, her lovebug, Sonya (Adlon) makes an appearance leading Jessi to eventually wonder if she loves Ali more than a friend. Season 5 will be filled with jealousy, unrequited love, and newfound crushes as the Big Mouth teens navigate 8th grade.

As of now, no official trailer of Big Mouth S5 has been released. However, as we are approaching closer to the premiere of Season 5, Netflix might drop the trailer anytime soon!

Till then, stay in touch with us and share with us your excitement.

Sangya Chakrabarty
Hi! I am a Kolkata-based engineering student with a passion for writing. I am fond of literally everything that has words and pictures on it (not my textbooks though 🙂 ). I am a huge, huge lover of both cats as well as dogs. That's it,byeee!