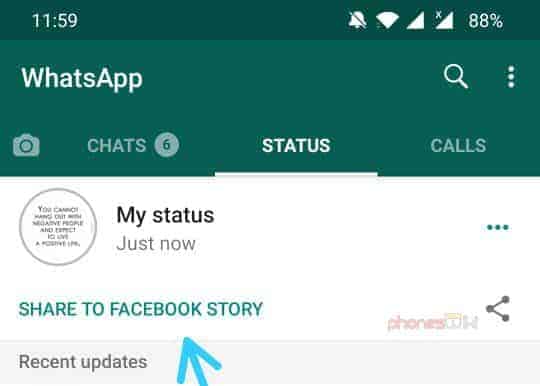 WhatsApp received an update on both iOS and Android which lets the user directly share their WhatsApp stories to their Facebook account. If you use WhatsApp and Facebook both, you will see the new option when you add a new status on your WhatsApp account.

Share to Facebook Story is activated as an option in the Status tab under ‘My Status’ option. Clicking on this button opens up the share sheet menu on Android and iPhone. You can also share your WhatsApp story to other apps from the menu apart from Facebook Story.

As WhatsApp is owned by Facebook, they are trying to sync as many features as possible. Facebook has seen lower interests from users over time and other social media apps are building an audience very competitively.

One reason for this is a lower reach of Facebook posts and more focus on advertised posts. Apps like Tik Tok have gained a lot of popularity over time while Facebook is now dealing with lower daily active users. Facebook is now trying to win back the interest of its users by integrating such features in their other apps.

In today’s digital world social sharing is one of the greatest ways of driving more traffic to your business. Your website visitors...
Read more
General

It is not simple for everyone to build a large and devoted social media following from the beginning. This is only feasible...
Read more
General

As a seasoned entrepreneur, you know what role social media marketing plays in scaling an online business. So, if you haven’t harnessed...
Read more